This past Friday night I shared a photo of some miniature painting work I did that evening; I finished up a pair of Stormtroopers from Imperial Assault and did most of the work to finish up my first-ever Kingdom Death miniature (well, sortof – more on that in a bit).

Here’s a closer look at the Kingdom Death miniature – it’s one of a two-pack of characters called the Satan Twins, and beyond that I don’t know much about it. This isn’t a real KD miniature – it’s a Chinese bootleg I bought on eBay for $6; real ones are in the neighborhood of $35. So given that I’m a terrible painter but interested in learning and getting better, a $6 experiment was more palatable than a $35 experiment.

Here’s a closer look at how it turned out: 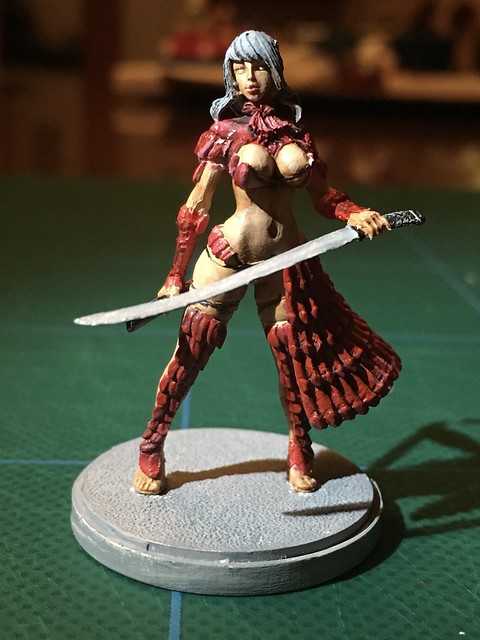 I’m pretty pleased with it. Here’s a guy trying to sell the same miniature on eBay as “pro painted” (it’s really not) for $300 – and I think mine is in at least a similar ballpark.

Things I will do differently next time:

And, given that this model is about an inch and a half tall, there are things about it I just didn’t notice until I looked at it blown up dozens of times in this photo:

Overall, even after looking over this from top to bottom in this huge photo and seeing the things I need to work on magnified to such a glaring degree, I’m quite happy with how this turned out. I’d put this on a table to play in a game without hesitation. And, I have a laundry list of things to try and do differently next time – which was the point of the experiment to begin with. I have two more Kingdom Death bootlegs miniatures to play around with and two more on the way from China, which I hope will get me comfortable enough to paint the two legitimate miniatures I bought from the Kingdom Death shop on Black Friday.